Home / Blog / Behind the scenes of “She of the Elements – Fire,Earth,Wind and Water”

Behind the scenes of “She of the Elements – Fire,Earth,Wind and Water”

Last summer I was very lucky to spend a week on a beautiful tiny island in the Georgia Strait between mainland British Columbia and Vancouver Island. I spent this time with about 50 other photographers from around the world at meetup lovingly referred to as “Flickr Island”. These meetups, which happen frequently are always an opportunity to visit with friends, meet new people and of course collaborate on new ideas.

At the time, I was midway through a 4 month workshop tour across North America and had already visited 85 countries in the previous 12 months. I was feeling very connected to the world and the people in it and I wanted to show that in an “elements” inspired series. Playing off the idea of Mother Nature, I wanted to use strong female models in these photos, I wanted to show the nurture and care that we as humans should have for the elements but also how the same elements can nurture and care for us.

I asked my friends Laura Zalenga, Lizzy Gadd, Whitney Justesen and Lindsey Ann Dransfield to be my elements and set off trying to develop concepts to illustrate each one.

For Earth, I spent an hour or so wandering underneath the large trees on the island collecting leaves of various shades and sizes. Then with the wonderful help of a group of “leaf wranglers” I built out a dress for Laura, trying to arrange them in a gradient and had to shoot fast since the wind would breeze through and scatter the leaves.

For Water, I knew that I wanted to take a photo of Lizzy in a place where she felt connected. Alouette Lake is one of her favourite places and I knew that it was a place that had a special spot in her heart. I wanted to show in each image that we are both made from the elements and we are also able to return to the elements. For Water, I tried to show this by turning Lizzy’s arm to water, returning her back to the lake. 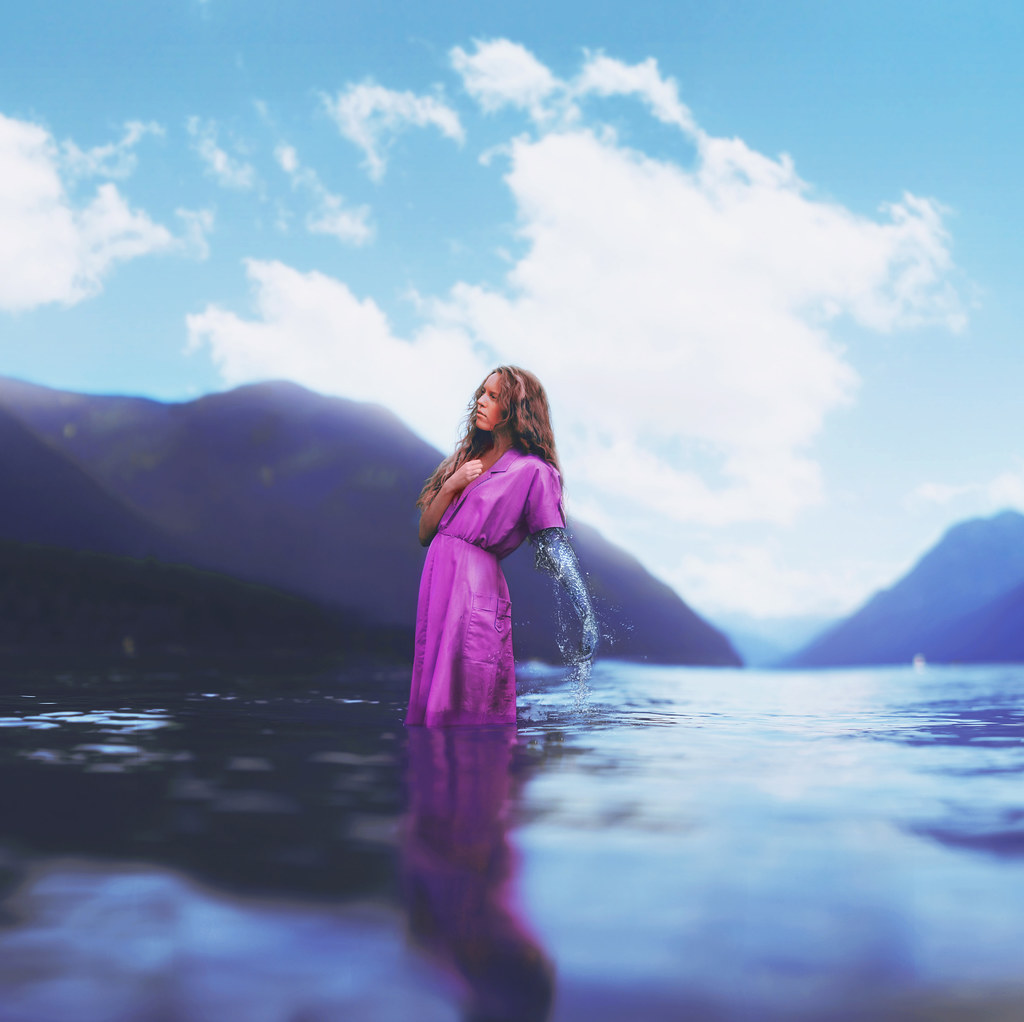 For Air, I had a totally different image in my head but couldn’t find the right location on the island. On one of the last evenings of the meetup, a beautiful sunset formed on the hills outside Vancouver and I asked Whitney if she was able to quickly transform into air, and she did! We stood at the edge of a lush pasture and while I dodged the occasional passing car, captured a bit of a subtle summer wind.

Fire was an interesting experience. I didn’t want the flames in the image to look fake, I wanted real fire and lucky for me, fire wrangler extroidinaire Brad Wagner was on hand to help. Using his wizardry he quickly explained how we could light Lindsey Ann’s hand on fire without her feeling a thing. Lindsey barely flinched as her hand was engulfed in flames and even though I was a bit panicked she was calm as ever.

I really enjoyed working on this series, trying to incorporate the elements in my style and working with four of the most beautiful and talented people I know. It worked out perfectly that I came across a contest for Thomas Cook that asked to see the elements in photographs so I’m submitting this blog post as my entry.

I love to see how other people interpret the elements and I’d love to see some of my favourite bloggers/photographers post their own elemental series. I’m inviting
Robert Cornelius Photography
Eric Albee Photography
Whitney Justesen Photography
Jen Brook
and
Kory Zuccarelli Photography

1 thought on “Behind the scenes of “She of the Elements – Fire,Earth,Wind and Water””