If you know me or have followed my photography for a while, you’ll know that I grew up in a fairly small town nestled deep within a valley in British Columbia’s Rocky Mountain Trench. It’s a beautiful corner of the world and certainly one of the best places to learn about photography.

When I began my photography journey I would run off into the nearby woods and fields and create using this natural beauty as my canvas and it was an almost never ending source of inspiration for me. But then, once I started to travel, I realized that I couldn’t really bring that mountainous canvas with me every where I went, so I’d have to adapt. One of the biggest hurdles for me was creating in a city, the buildings and people and noise were a far cry from my towering trees and grassy fields. BUT I learned that it just meant I had to get more creative with the spaces I had in front of me.

Recently I spent a few weeks in New York City, a place where I’ve spent quite a bit of time in the last few years, and one that surprisingly fills me with creativity. So I thought I’d share with you 5 places that I found in the city to be creative and some examples of my talented friends being creative in those spaces as well!

*disclaimer* depending on the photos you are taking you may need to apply for a permit to shoot inside a city park. Please check before you go!

1. Central Park
Of course the first place to suggest is the park of all parks, Central Park! The 150 year old park smack in the middle of Manhattan is filled with a lot of interesting spots that lend themselves to creative photography. In fact, the first two times I visited New York City, I taught photography workshops in the park and it was a perfect canvas!

My favourite parts of the 800+ acre part include the area around Bethesda Fountain and the rocky areas found close to the park entrance near Columbus Circle. I’ve used these areas in many photos and I often like the fountain area to take candid street style photos as there are usually some interesting shots to be found. The north part of the park is much less developed and some of the small stone bridges, waterfalls, and steps can provide more wooded backgrounds for images.

While Central Park is convenient due to it’s rather central location and wide space, it can be quite busy and if you’re looking for a bit less activity while you photograph, Prospect Park located in Brooklyn, may be your next best choice! I first visited the park with a photographer friend who frequently uses it’s wooded landscape in his work and it was definitely an enchanting and picturesque location.

Recently I returned to photograph with two talented friends in the snow and the wide open spaces mixed with the dense trees gave us a great selection of backdrops to use in our work without having to deal with crowds of people or distracting background elements. The below photos are by my talented friend Vincent Minor.

If the seaside and bright colours are more of what you’re looking for in your images, a subway ride down to Coney Island might be your best bet! While the boardwalk and beach can get busy in the warmer months, it can still be quite a beautiful place to get creative any time of the year. I visited the pier and beach area in October and the water was warm enough for our model to get a bit wet and the sun was nice and golden.

Look for the vivid colours of the amusement park, graffiti and boardwalk shops to use pops of colour in your photos or take your shoot underneath the pier for some great shots that help diffuse some of the direct sunlight.

No doubt one of the busiest bridges in New York it’s often filled with tourists wielding selfie-sticks while cyclists and joggers make their way from Brooklyn to Manhattan. But if you’re willing to be up before the sun you can have the bridge almost all to yourself which is what I did one morning to join in on a shoot with a visiting yoga instructor. 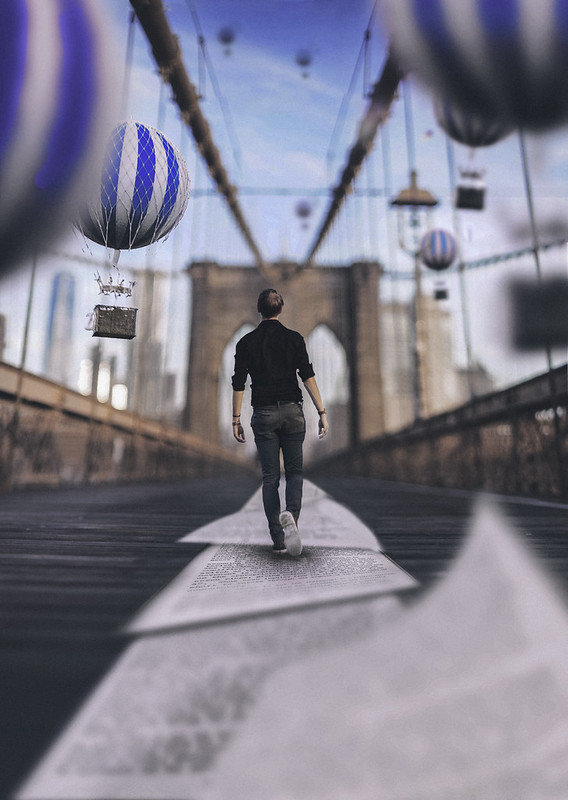 Across the bridge in the area known as DUMBO you’ll find Brooklyn Bridge Park which can give you a nice spot to get creative using the rocks, buildings, water and cityscape in your shots. There are many great spots to shoot giving you interesting perspective and creative framing. Look for reflections and framing using available windows, arches and streets!

Back in Manhattan a few blocks west of Central Park you’ll find the narrow Riverside Park running along the Hudson River. While it has less open space than Prospect Park or Central Park it can still provide you with some great locations to shoot some creative photos.

On the side closest to the river you’ll find some open areas with rocks leading to the water which give you lots of room to shoot with. On the opposite side of the park you’ll find some more wooded areas, some long open roadways and pathways that give great lines and some big stone walls and steps. The below photos are by my talented friend Kristina Kashtanova.

Have you done creative photography in New York City? Where’s your favourite place to go and photograph? Share your images below!