Home / Blog / The Pursuit of Happiness

The Pursuit of Happiness

“The General Assembly,[…] Conscious that the pursuit of happiness is a fundamental human goal,[…] Recognizing also the need for a more inclusive, equitable and balanced approach to economic growth that promotes sustainable development, poverty eradication, happiness and the well-being of all peoples, Decides to proclaim 20 March the International Day of Happiness, Invites all Member States, organizations of the United Nations system and other international and regional organizations, as well as civil society, including non-governmental organizations and individuals, to observe the International Day of Happiness in an appropriate manner, including through education and public awareness-raising activities[…]”— United Nations General Assembly, Resolution adopted by the General Assembly on 28 June 2012[2]

But what exactly does it mean to be happy? How to we maintain it and what if we always just seem to be chasing it?

Last year when I was struggling with a bout of depression and anxiety, chasing after happiness and the idea of what it meant was actually wearing me out even more. I started paying attention to how others around me were also chasing their happiness and eventually it started mapping itself out like a racing track, everyone sprinting  around in circles after the robotic little rabbit but this time the rabbit was our made up idea of what our ideal happiness was.

So many people that I talked to were all experiencing the same thing, the exhausting pursuit of happiness. But did we even know what we were looking for? Was it the job that was better or paid more, a new relationship, more attention on social media? What was the prize and how could it be so elusive to so many people all at the same time? I changed my attention from those that were searching for happiness to those that seemed to have already found it, they seemed more credible to follow as they’d “made it”, at least so I thought. But what I found in talking to the people who were happy was they hadn’t found “happiness” in the greater sense of it, they’d found things that made them feel happy.

What I learned from talking to, following, and modelling myself after both groups of people was that happiness isn’t a one sized fits all box. Our constant search for “HAPPINESS” makes us built it up to a status that likens it to the promised land, like if we finally find the front doors they will open up to an all you can eat buffet of everything good and pure and magical in the world. But our lives are not the all  you can eat pizza buffet that we dream of, there’s going to be some up and some down and those that I talked to that were “happy” had acknowledged that and embraced the lower parts because they knew they also had things that brought them back up.

We are immersed in a world via social media where our “best” is presented through daily snapchats, instagram posts and facebook albums.

We want to share our incredible holidays and nights out and those perfect moments and that’s all really great! I love being able to scroll through and see friends enjoying their lives and doing amazing things. But there’s a down side to that, it creates an edited version of what life is and it can encourage a sense of “hurry and catch up to what I’m doing!” I know that sometimes, if I’ve had a few lazy days and haven’t done anything of note I feel a little ghost voice saying “social media needs to know that you’ve done something cool…do something cool!” That voice is useless, it’s harmful and it’s not something that I listen to but it’s there and it can be a weight that pulls on us in our quest for happiness, we’re so busy trying to match other people’s happiness that we aren’t even really that happy at all.

I try to think about what would make me happy. A while I would have said travelling, maybe more money so I could buy things I wanted, I wanted the best new things and the money to be free I wanted other people in my life to change so that my relationships with them could be happier. Those were difficult and stressful and tiring to chase after. Now when I think about what my pursuit of happiness is, it’s much different. For me my idea of happiness comes from making a positive difference to the world, connecting positively with people in my life and having my basic needs taken care of. Those things I feel are tangible and realistic and I don’t feel that I have to frantically run after them to make them happen. When my ideas of what happiness is shifted, my energy spent on finding that happiness was a lot less. I wasn’t trying to compare myself to others because my clothes weren’t from the right shop or my camera wasn’t this year’s model or I hadn’t seen a certain movie.

I spent all the energy that I’d been using on trying to find happiness on the things that actually did make me happy and everything changed.

I’ve seen a few people talk about about why we should have a day for happiness. Shouldn’t we be happy every day? Sure but maybe some people won’t feel happiness every day and that’s ok. We have these days so that we can have a conversation about things, to talk and share and think about happiness and what it means in our life.

Happiness is not Mt. Everest or a mission to space, it’s not an unobtainable race. Happiness is a series of moments, of tiny little pieces of our lives that add up to a bigger and brighter and happier picture. In the words of Feist

“We’ll collect the moments one by one, I guess that’s how the future’s done”.

So today, on International Day of Happiness, let’s stop racing against the crowd on the marathon to “happiness” and enjoy the small moments that add up to a complete feeling of being happy. Enjoy a cupcake or a walk with your dog, watch your favourite television show or listen to some guilty pleasure music. Find what makes you happy and embrace that rather than the idea of happiness as a whole. 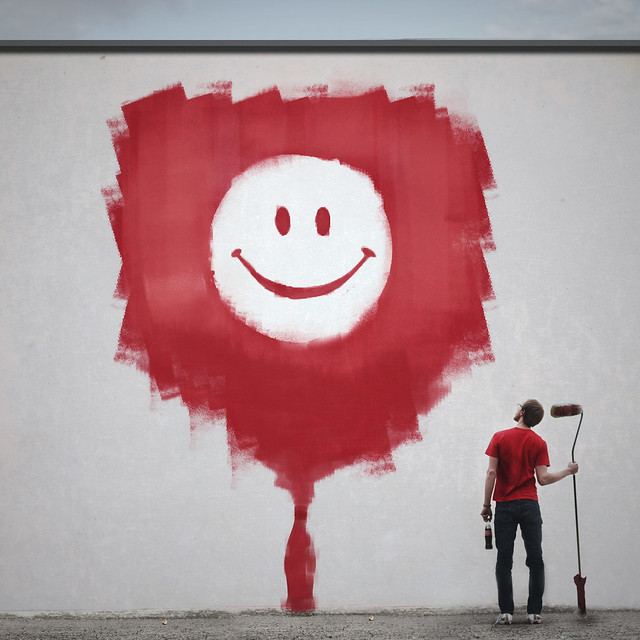 2 thoughts on “The Pursuit of Happiness”